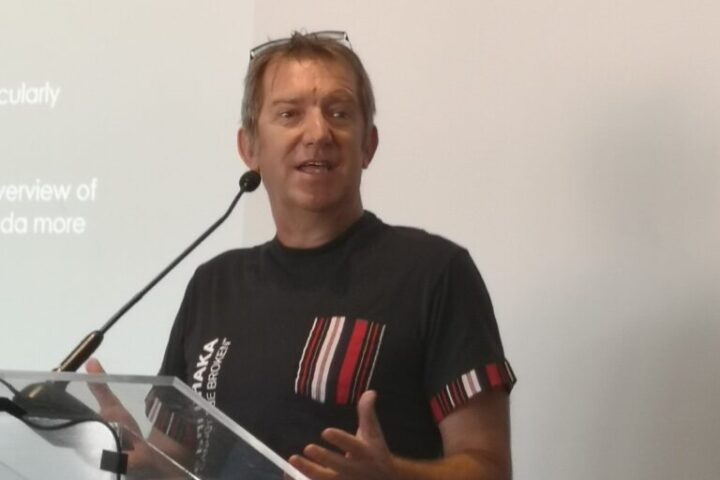 Dr Jeremy Silvester joined the ICOM group ICME in 2011. Over the years he worked with dedication to our mission for the human rights of indigenous peoples, always working collaboratively to secure the culture and dignity of peoples around the world.

Jeremy initiated and completed several important projects with ICOM funding. He employed his extensive organisation skills and widespread contacts to manage the 2012 ICME conference Commodifying Culture? Cultural Villages and Living Museums and the post-conference tour in Namibia. At this meeting in Africa Jeremy’s vast knowledge, which he always wore so lightly, his great sense of humour, outstanding kindness and warmth meant that many ICME members became firm friends with him and we went on to develop our work together.

In 2014 Jeremy was instrumental in developing the ICOM funded Africa Accessioned Project which was undertaken in partnership with the Southern African Development Community Heritage Association (SADCHA) and ICOM Namibia. In 2017 and 2018 ICME, ICOM Botswana, Namibia and South Africa worked on an ICOM funded project entitled Human Remains Management in Southern Africa. The Commonwealth Association of Museums (CAM) led this project in collaboration with Iziko Museums of South Africa and Jeremy was ICME’s representative and point of contact. He co-authored the publication ‘Who Were They? Repatriation and the Rehumanisation of Human Remains in Museums in Southern Africa’ about this work in Museums and Communities. Diversity and Dialogue and Collaboration in an Age of Migrations (2019).

In these projects, Dr Silvester’s scholarship consistently pointed to our common concerns as human beings. Jeremy did so much to raise the voices and visibilities of those who have been silenced or ignored in museums and the wider world. He has long spoken to the issues underpinning the contemporary Black Lives Matter movement, working to challenge racism and oppression all his life.  He will be so sorely missed. Our thoughts go out to his family and friends around the world.

It is with deep sadness that we announce that Dr Jeremy Silvester, a member of the ICME Board and editor of ICME News, has passed away. It’s a shock and I still can’t believe it!

I met Jeremy first time at the 25th ICOM General Conference in September 2018 in Kyoto. We were both running to become members of the ICME board. A few days later we were elected and Jeremy became the new ICME News editor. From the beginning, I realised, that we are tuned to the same wavelength. Jeremy’s advocacy and fighting spirit for the right thing made him also a director of the Museum Association of Namibia (M.A.N.) where he was living.  He was deeply engaged in the restitution of the looted Namibian museum objects and human remains from Europe. As the editor, he commenced his tenure with ICME News 89, and we started to translate these from English to other languages, Spanish and Arabic, to cover a much wider audience interested in ethnographic museums and collections and contemporary happenings. With ICME News 90 Jeremy joined the world movement “Black lives matter” and exposed all the injustices that are still happening. ICME News 91 he dedicated to Covid19 and ethnographic museums, unknowing the fate that awaited him.

Just at the beginning when the terrible Covid19 started to make its deadly way all over the world, we met with Jeremy at the Conference Living Forward, Looking Back: Museum Practice for Postcolonial Futures at the South African Museum in Cape Town, South Africa (March 9-15, 2020) organised by the Commonwealth Association of Museums (CAM), Iziko Museums of South Africa and ICME. We joined the Pre-conference Workshops Conservation of Human Remains and Spiritual Objects and  Interpreting Difficult History: Curation and Education: Gender and Sites of Conscience, Digital approaches to restorative history – engaging, archiving and preserving and Museum Education as a tool to review difficult histories. Jeremy was a wonderful and active participant at all times.

Jeremy was also a very active ICME board member with numerous ideas and suggestions.

On March 18th 2021, he was one of the active members with The Museums Association of Namibia (MAN) of which he was director, for the Delegation of the European Union (EU) to Namibia and the Ministry of Education, Arts and Culture (MoEAC) who invited all Namibians and all citizens of the world to attend the virtual launch of the Museum of Namibian music.

At the beginning of June 2021, he nearly finished our newsletter ICME News 92 and writing a review of the famous book “The Brutish museums” written by Dan Hicks. Our last communication was on June 9th, a month ago.

Jeremy remains in our deep thoughts and prayers. May his soul rest in peace.